One of the best things about living in Toronto is the range of ethnic food you can get. This past weekend, my husband I are were off to the east end to visit family. I decided to drop by Iqbal Foods in East York. This family-run South Asian grocery store and successful restaurant is an awesome place for bargain ethnic foods! The crowds are legendary, and this being Ramadan, the Muslim month of fasting meant that on the weekend the store was full of Muslim ladies {both the burqa (veil) and salwar kameez (long tunic and pants) clad ones} and bearded Arab Muslim gents who outnumbered the turbaned Sikh uncles and capri-wearing Hindu aunties. Pretty much the whole subcontinent was there shopping for food! 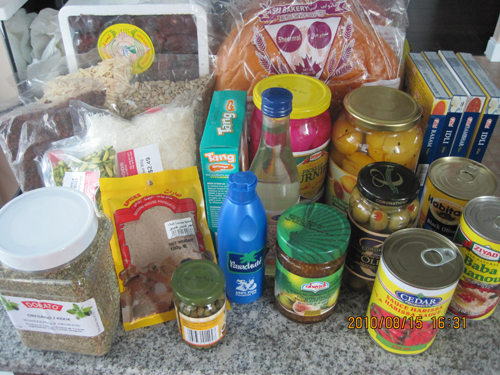 So what did I get? Well, just a bunch of pantry staples as I didn’t want the food to spoil as it sat in the car. From left to right, my stash includes:

So I got a whole bunch of ingredients for my pantry from India, Pakistan, Turkey, Spain, Lebanon, Tunisia, Iran, Saudi Arabia…from my favourite regions of the world [North African to China] …!