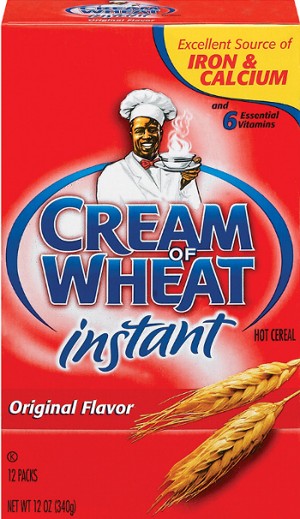 I was feeling a bit under the weather today. Tummy’s a bit upset and there’s a general ache there, so decided to work from home. Scrounging around in my pantry, I found a box of cream of wheat that I recently bought.

My dad says that back in the old days, in the home country, they would be fed cream of wheat for breakfast. Called “dalia”, it was nutritious and good for infants and the elderly alike.

So I made a bowl with salt and milk, and poured in some Canadian maple syrup. YUM! I was in childhood heaven!

The history of cream of wheat is really interesting too. Apparently, in the economic panic of 1893, a small flour mill in Grand Forks, N.D. somehow managed to survive.

When they began to run out of operating funds, one of the millers suggested the owners try making and marketing a hot porridge made from the part of the wheat called farina (germ+endosperm).

The owners agreed and sent a sample to their New York brokers. The product made an impression and the brokers switched their order from flour to porridge. Within five years, the demand for Cream of Wheat grew so much that they had to move from Grand Forks to Minneapolis, Minn. to be nearer to freight options and suppliers.

Since its humble beginnings, Cream of Wheat has provided a hot breakfast to generations of Americans (or, in this case, East Indians).